Tenants at the Empire State Building enjoy the benefits of The Urban Campus which continues to expand. New components of The Urban Campus include a 15,000-square-foot, tenant-only fitness center; a tenant-only conference center; STATE Grill and Bar, with private executive dining and event space and Tacombi; 7 in-building dining options; and a full complement of tenant services.

The Empire State Building also has taken a leading role in sustainability, partnering with the Clinton Climate Initiative, Rocky Mountain Institute, Johnson Controls, and JLL to develop an innovative process for a comprehensive energy efficiency retrofit program that will reduce the building’s total energy consumption by 50% and that has led the building to receive an Energy Star rating of 86, placing it in the top 20% in energy efficiency among all buildings measured features of the restoration include the Art Deco masterpiece lobby and new Otis Destination Dispatch elevators. 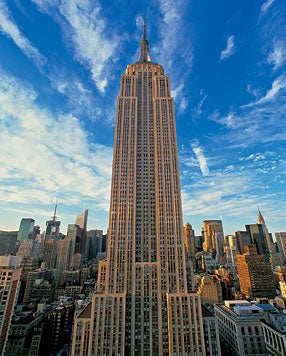 Cleaning is included in our standard lease agreement and all buildings have an in-house maintenance team. All lobby and public areas are kept to the highest standards of cleanliness.

This building includes a fitness center and a tenant-only conference center.

Walk to on-site or nearby restaurants. This building features on-site catering services.

This building features retail spaces and is centrally located in a prime neighborhood accessible to shopping, hotels, and other amenities.

The Wall Street Journal: ESRT CEO’s Letter to the Editor